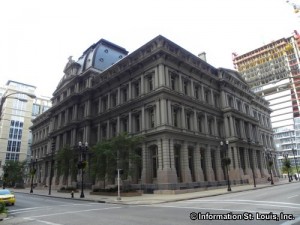 
The Old Post Office in St. Louis Missouri is a massive building sitting on an entire city block. It is one of two federal buildings that were designed by architect Alfred B. Mullett in the Second Empire architectural style that are still standing. The other building is the Old Executive Office Building in Washington, D.C. Originally called The U.S. Customs House and Post Office, it was built between 1874 and 1882 and is a St Louis Landmark and is now on the National Register of Historic Places as well as being a National Historic Landmark. The building was transferred from the Federal Government to the State of Missouri in 2004 and today has been beautifully renovated and houses the offices of the Missouri Court of Appeals, Eastern District; the downtown campus of Webster University; a St. Louis Public Library branch, the Missouri Secretary of State and more.

Do you have a photo for Old Post Office? Send it to us! Submit Your Photo